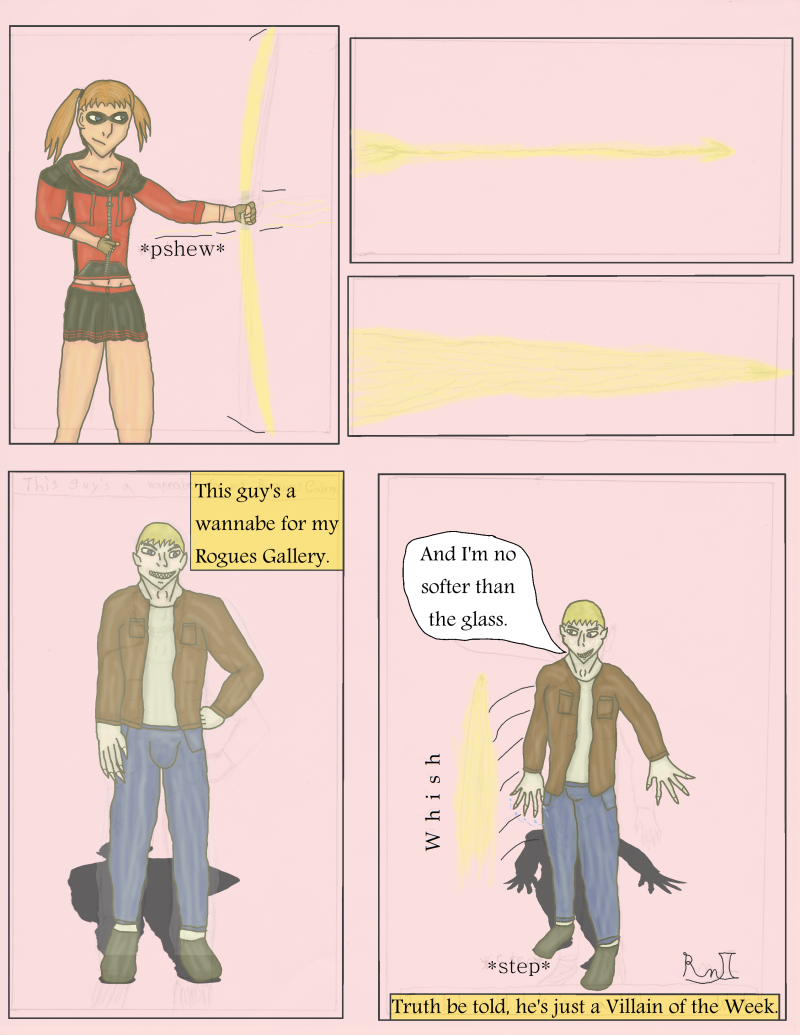 Messed around with the site a little.

I didn't really accomplish anything of note, yet alone, anything I was really aiming for.

My navigation at the top is a mess. (Ideally, the navigation would be in the center, and each would have a button that's an image on top for them. That, aside from me maybe wanting some sort of banner on top of the site.)

The date for comic pages doesn't show, and it needs to.

If it's not already added, I need arrow key navigation.

I still want titles to be shown in comments.

I know I need to make a "top of page" shortcut for convenience, too.

That, aside from adding images to "rate this comic", "first", "back", "next", and "latest", which I need to do. Not to mention, getting guest avatars working. I know that's possible, too, but it's also something I tried to make work but couldn't. And a custom cursor would be nice, too, which I've seen. Not to mention, a favicon!

There's so much improvement that I'd like to get done, but half of it is stuff which I can do just with extreme difficulty (thus, haven't bothered), the other half is stuff I can't figure out how to do.

I am not a natural coder, if you couldn't tell.

This link should take you to the first page!

Both on the comic and on the stuff surrounding the comic! On Sunday, I revamped the characters page. For today, my pet project was revamping the extras page, and all the various sub-pages which can be found therein.

I mean, there's still lots of stuff I could add! Many, many images in fact. Whole much of lovely stuff I've worked on over the years. Plus trivia facts I'm dieing to put up. But for now, I'm content with what I've got, because I need to focus more on the drawing part. I'm still working on it, drawing more and more and more each day, getting better at it, but it's still an evolving process, learning through all the various mistakes I'm making.

I so wish it were already live, but at the same time, I'm glad I have this time to prepare myself.

We are in fact doing this thing.

I've deleted all of the fluff comics, the test stuff.

So right now, my site looks all lonely and whatnot.

It won't stay that way.

In just about 3 weeks, the first page for Red Hood Rider will become live, populating my pages with actual ~content~.

And I intend to get my comic fully finished prior to that point.

Still got the rest of Episode 1 to do, but it WILL get done, I promise you. The comic is set to go live. So there's no stopping it now. This is a thing, that is happening. You have no clue how long I've waited to share this with all of you. And it will be gorgeous. I SO want to share it with you right here and now, but...patience. I'll show some patience. You'll maybe see it in my comic avatar, though!

I've finished all the drawings for Episode 1. However, I actually need to color those pages, and that will take me some time.

I've got an optimistic goal of October 8th, 2016, but no promises! It really depends on how quickly I can actually get those pages done and have them be good. I honestly don't know. It could take me a couple hours each or a couple days each. We'll just have to see.

Now, I don't know how long it'll take me to produce the second Episode. (It's taken me one and a half years for the first!) With a once-a-week update schedule, I'll burn through my buffer in five months, give or take, and that's if I update only once a week. And if I'm doing my mental math correctly. (4 comics a month, 23 pages, so about five months.) But, dang it, I'm gonna do this. Promise you. It is going to happen, and happen now.

I know I said that back in January.

What makes this time different?

Well, at least for the first episode...because I've done the work already!

There's a reason I haven't been coming back here just to deliver disappointments.

I came this time to deliver the good news!